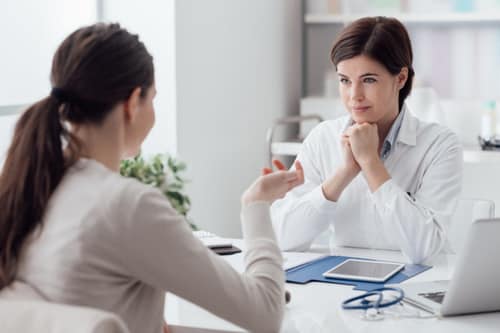 MY LIFE WITH PCOS: A PERSONAL STORY

I saw a meme online that asked: “Which is the hardest for you to say? 1. I love you; 2. I was wrong, I’m sorry; 3. I need help; 4. I appreciate you, or 5. Worcestershire sauce.” I Googled “Worcestershire sauce pronunciation” just to double-check that I was indeed pronouncing it correctly. I then returned to the question and confirmed to myself that I have no trouble saying, “I love you” or “I appreciate you,” and in most situations will admit that I was wrong, and issue an apology.

Situations, when I hesitate to admit wrongdoing, are usually when I have to admit this to my husband, but that’s normal, right? I realized that the answer to this question was that asking for help, even when I need it most, was difficult for me. Perhaps this has something to do with the vulnerability and transparency that comes with asking another person for help.

Interestingly enough, being vulnerable at times and asking for help have now become parts of my job description as a patient advocate and founder of PCOS Challenge: The National Polycystic Ovary Syndrome Association. Advocacy work involves sharing things about yourself that many people may find uncomfortable sharing, but doing so with the intent to create change. It is sacrificing your privacy and being vulnerable for the greater good.

My Journey with PCOS

I am a woman with polycystic ovary syndrome (PCOS), the most common hormone disorder in women. I was diagnosed in my late 20s after I missed a period and went to my ObGYN in a panic. The doctor ran hormone tests, took my history, and did a transvaginal ultrasound. She diagnosed me with PCOS and told me to come back to see her when I wanted to conceive, and not to worry about irregular periods because “lots of women would love not to have their periods.”

Afterward, my OBGYN referred me to an endocrinologist who told me to return to him in six months after I lose weight. My health insurance at the time would not pay for visits with a dietitian or nutritionist because I wasn’t diabetic. I felt dismissed by my healthcare team and left to my own devices to figure out how to manage PCOS and live a healthier life. This was the beginning of my journey with PCOS.

After doing research, I found out that I had been experiencing PCOS symptoms such as hair loss and weight gain since adolescence. Looking back at my history, I found that there were many missed opportunities for an earlier diagnosis, but due to my own lack of awareness about PCOS, and various specialists not asking the right questions, I was diagnosed almost two decades after the onset of symptoms.

These experiences and others, and the desire to improve this process for others, led me to create an organization to better educate patients, providers, and the community as well as provide a platform for advocacy to effect systematic changes to improve the diagnosis, treatment, and care of PCOS patients. So my life with PCOS, almost immediately after my diagnosis, has been focused on advocacy and increasing awareness.

PCOS is a very common metabolic, hormone, and reproductive disorder that affects anywhere from 10% to up to 21% of women in some parts of the world. The disorder is characterized as a constellation of symptoms that can impact multiple aspects of a woman’s life and health, including metabolic, reproductive and mental, and psychosocial health.

PCOS is most commonly diagnosed if there are two or three of the following:

There is also a long list of symptoms and disorders that are linked to PCOS such as insulin resistance, weight gain, depression, anxiety, eating disorders, body image issues, pregnancy-related complications, nonalcoholic fatty liver disease, endometrial cancer, infertility, and many more. In fact, due to irregular ovulation, PCOS is the most common cause of infertility in women.

According to the Centers for Disease Control and Prevention, 50% of women with PCOS will become diabetic or pre-diabetic before age 40. In a nutshell, PCOS is a serious disorder that impacts many aspects of life, yet is severely underdiagnosed, misdiagnosed, and under-recognized by healthcare providers. Fifty percent are going undiagnosed or misdiagnosed.

Most PCOS patients start experiencing symptoms around the onset of puberty, but many are not diagnosed until they have difficulty getting pregnant or worse, until after they have developed other metabolic complications from having PCOS. These glaring gaps in care for millions of people who are impacted by PCOS are the reason that we can no longer stay silent. We have to speak up and advocate for ourselves as patients and providers who care for patients with PCOS. It is time for us all to ask for help.

The importance of asking for help

Research shows that the majority of women with PCOS were dissatisfied with the diagnosis process and the lack of information received after being diagnosed. Over the past decade of doing this work, I have heard countless stories similar to mine and others where the lack of awareness and education has had dangerous and life-altering consequences.

Some of these stories include patients developing cancer when their lack of periods was dismissed as “nothing to worry about,” or the development of self-esteem issues and eating disorders after being given the number for Weight Watchers or being told to go on a liquid diet as “prescriptions” for PCOS; or the loss of opportunity to build their families from being undiagnosed or given an unnecessary hysterectomy during reproductive years. Every one should find these patient experiences to be unacceptable.

This is why I view my PCOS diagnosis as a defining moment in my life. When people ask me what my life with PCOS has been like, I realize that it has been a series of me asking for help, not just for myself, but for everyone impacted by PCOS and those who will be in the future. Asking for help has now become a part of the process of creating opportunities for change where the patient, provider, and research communities can work together to be a part of the solution.

Admittedly, I may still have a bit of trouble asking for help in my personal life; however, in my professional life, I think the only way forward is for more of us to work together, asking for help together, and changing the future together.

Sasha Ottey is the Founder and Executive Director of PCOS Challenge: The National Polycystic Ovary Syndrome Association, the leading patient support and advocacy organization for women and girls with PCOS. As Executive Director of PCOS Challenge, Sasha built a coalition of over 70 major national and international health organizations and led the first successful legislative advocacy effort in the U.S. Congress to recognize the seriousness of PCOS, the need for further research, improved treatment and care options, and to designate September as PCOS Awareness Month. In 2018, Sasha received the Hope Award for Achievement at RESOLVE’s Night of Hope. Sasha is a Clinical and Research Microbiologist with a Bachelor’s degree in Clinical Laboratory Science from Howard University and a Master’s in Health Administration from the University of Phoenix. Prior to founding the PCOS Challenge, Sasha was a contract research microbiologist at the National Institutes of Health (NIH).